After many years seeking wisdom and knowledge from the world, from eminent architects including Mario Botta, Alvaro Siza, Umberto Riva and Aldo Giurgola in universities and workplaces in Milano, Lausanne, Switzerland and New York, Luigi settled in Sydney in 1984 and shortly after commenced his practice in Surry Hills.

He immediately embraced with enthusiasm the Australian culture, landscape and spirit and married his international upbringing to the local.  The result was a great number of buildings that are not parochial or provincial, and his best projects are the fruit of a marriage of cultures.

For posterity, he has bred a progeny comprising a successful architect, a challenging artist and a world recognised musician.

Simon joined Luigi Rosselli Pty Ltd in February 2007 and prior to that spent 15 years working with a Port Stephens (NSW) firm of architects where he was also an Associate Architect.

He has experience in the design and documentation of a range of building types, from residential and commercial, to light industrial and community facilities. With Luigi Rosselli, he has contributed as part of the team to the completion of a series of prestigious houses for the firm’s discerning clients.

Simon is committed to excellence in the practice of architecture through careful client consultation, finely realised design, and with a firm eye on sustainability.

Jane’s first architectural project was designing “Buckingham Palace” in Lego on a boat heading the UK when she was 4. After studying fine arts, working in restaurant management and extensive travelling, Jane realised her calling and followed her path to architecture.

Jane joined Luigi Rosselli Architects in 2010 after working in various Sydney firms and running her own private practice. She has experience across a wide range of architectural project types including residential design, restaurants, schools and office fit-outs. Jane believes in the importance of the client brief, response to site, the interconnection between the built, natural and social landscape, and places a high value on aesthetics.

Nicola joined Luigi Rosselli after working more than 4 years for an international firm in Shanghai. His work experience varies from large scale cultural projects, commercial, workplace and residential, with a special focus on museum and exhibition design. In Shanghai, he worked with Mario Botta for the Museum of Ceramic Art in Nanchang, and other competitions. His project for the Museum of Ancient Oracles of Anyang has been shortlisted at the World Architecture Festival 2012 in Singapore for the category “Future Project-Culture”. In 2011 he won the 1st Prize co-winner at the XXI International Prize of Architecture in Camerino with his Laureate Thesis “Design and Enhancement of the 3rd Mile of the Via Appia Antica in Rome”.

Passion and curiosity for architecture, art, design and all artistic expressions took Nicola around the world, moved by the will to learn, broaden his perspectives and promoting the Italian taste in design.

Enthusiast of outdoor sports, acting and singing when in need of recharging the batteries, Nicola does not hesitate to travel to remote places, to discover other cultures and vernacular architecture, or just looking for new adventures.

Evan is passionate about creating unique homes that complement and enhance his client’s lives. Before joining Luigi Rosselli, he worked for some 15 years on many different project typologies, most recently on Sydney’s Northern Beaches, designing and delivering many successful high-end residential projects. Evan completed his Bachelor’s degree at UTS studying part-time, which allowed him to gain extensive and valuable practical experience working in one of the largest architectural firms in Australia. After travelling the world, he completed his Master’s Degree at the University of Newcastle where he also tutored in design.
Evan is experienced in all stages of project delivery, has a keen eye for detail and aesthetics, and believes the best projects start with a good plan and a strong client relationship. When he’s not tackling DIY projects, Evan spends his weekends outdoors sharing his love of cooking, music and nature with his family and friends.

Curious, detail-oriented and unconformist since a young age, Lluis has looked to expand his architectural knowledge by learning in some of the most prestigious universities worldwide such as UPC in Barcelona, TUT in Finland, FAU-USP in Sao Paulo and EPFL in Lausanne.   Those experiences have permitted him to be aware of different methodologies, materializations, and conceptions within the architectural creative process.

After spending two years in France working in various scaled projects, especially in heritage context high-end residential houses, he joined Luigi Rosselli Architects in order to continue developing his architectural understanding and to further his career in dynamic, enthusiastic and creative aspects.

Diana joined Luigi Rosselli after working three and half years with jaa studio, gaining extensive experience working on high-end residential projects in Sydney and its surrounds. Concurrently, she also tutored at UNSW, mentoring the first year architecture students. She completed her final semester of masters in Italy, in an interdisciplinary summer design studio collaborating with local and international students of IUAC University of Venice.

Diana is interested in the mediation that the built environment can provide between program, composition and surrounding context, both natural and artificial. Nature loving and adrenaline seeking, outside of the studio, you will find her rock climbing the cliffs or running the trails of the blue mountains.

After relocating to Sydney in 2014, Harry worked for BHA Architects and Smart Design Studio before joining Luigi Rosselli Architects as a Project Architect and 3D visualisation artist.

After graduating from architecture in 2013, Daniel started his professional career in Colombia working for the internationally renowned practice El Equipo de Mazzanti, where he collaborated in public competitions and the design of public projects looking to improve social and economic conditions of communities. Later on, Daniel collaborated with design focused practices, gaining experience and exploring his passion for residential architecture in both design and project management roles.

In 2015 he moved to Sydney where he finished his Masters in Construction Project Management at UNSW. Prior to joining Luigi Rosselli Architects, Daniel worked as a graduate architect at Corben Architects, specialising in high-end residential projects.

Daniel is passionate about architecture as a collaborative process with a socio-economic and environmental impact. In his free time, Daniel enjoys outdoor activities and exploring different places and cultures.

Jeffrey is passionate about holistic design outcomes, where architecture, interiors and landscapes are all entwined to reflect a singular concept. A keen collaborator and problem solver, he is interested in highly client specific work, bespoke details and forming a strong connection to the immediate environment. He joined the studio in 2016, drawn not only to Luigi Rosselli Architects’ use of signature curves and sinuous forms but also their eclectic approach to adaptive-use and reinvention of historical typologies within contemporary contexts. In his time at Luigi Rosselli, he has worked across all stages of the design process on residential, multi-residential and commercial buildings in both urban and rural contexts.

Jeffrey studied at the University of Sydney, graduating with First Class Honours in 2017. He was awarded the Faculty of Architecture’s Graduate Award in Innovation and Design Excellence and the university-wide scholarship for honours research, among other distinctions. His thesis project focused on an adaptive re-use design for Australia’s first hospital, Sydney Hospital, which served to develop his sensitive understanding of the relationship between human proportions and architecture as well as a love for working with existing sites interwoven with history.

Christa Elizabeth is from german & bolivian origin and studied Architecture at TU Berlin. Prior to moving to Sydney and joining the Luigi Rosselli team, she worked at Brenne Architekten and Bruno Fioretti Marquez in Berlin. Her approach to architecture combines her passion for nature and design, focusing mainly on the reinterpretation of spaces in between in projects from various scales. Architecture is for her an opportunity to seek balance between function, light and materiality in order create flowing and flexible spaces where all senses can be engaged.

Outside the studio Christa Elizabeth is interested in all layers of nature from art, material research and design to botany.

At the beginning of her career, she had several rewarding experiences in architecture firms in Belgium, Italy, Spain and Papua New Guinea, before creating her own firm in Belgium and then in Morocco. The Osmooz Studio (www.osmooz.net) in Marrakech was established with her husband, and over a period of nine years specialised in designing luxury houses combining local handmade earth bricks, natural clay, rammed earth & stone throughout their projects.  Isabelle taught at the National Architecture School of Marrakesh in 2016-2017 and has created educational kits to teach architecture to children. She designed an award winning, and widely published mobile centre called “Bluub”, used for workshops related to Art and Architecture which was selected for the 2011 Venice Biennale.

From rugs to furniture design some of her pieces were represented at the international fair “Maison et objet” in Paris and won an award for a collection made with recycled materials.

Her first book: “Li et les spheres, un voyage au coeur de l’architecture” (Li and the Spheres, a Trip through the Country of Architecture), written in collaboration with Anne Norman, was published in2017 and was selected to represent Belgium at the 2018 Nancy Book Fair.

Architecture is for her more than designing buildings.

Born and raised in Queenstown, New Zealand, Polly has joined our office on completion of her 5-year degree and UTS where she completed both her undergraduate and masters in Architecture.

During her years of study, Polly worked at both Turner Studio and Woods Bagot gaining experience over multiple large-scale projects where she was able to gain valuable practical experience within the industry. With a love for residential architecture and holistic approaches, she was drawn to the Luigi Rosselli approach of designing homes that not only positively impact the client’s life + wellbeing but also applies sustainable principles within the home and broader context. With a passion for the outdoors, it is in her interests to see how we can intertwin nature within our homes through curated architecture and interiors.

During her weekends and time off, more often than not you’ll find Polly running & hiking in national parks or at home cooking with friends and family.

Before joining Luigi Rosselli Architects, Yun worked for several architecture firms both in Sydney and his native China, and delivered numerous projects from small house renovations to substantial new multi-storey apartments across the Sydney region. Over 10 years of architectural practice, Yun has built a solid knowledge in the design and documentation of projects of varying scales, particularly in the high-end residential sector. Yun believes architecture should take root on the site it inhabits, and that it is people who make architecture real.

Outside the architect’s studio, Yun indulges his passions for sports, food and travelling. 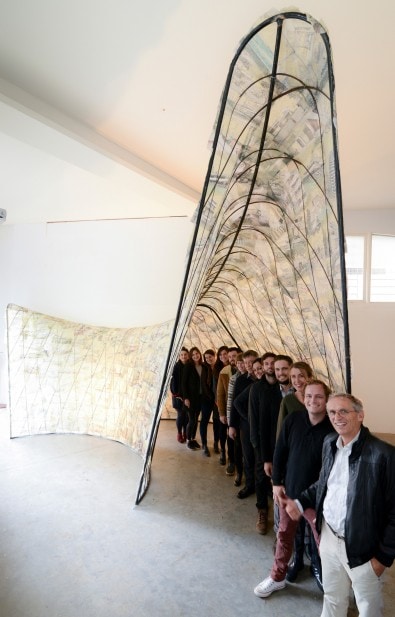